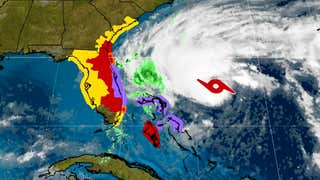 Tropical Storm Nicole is forecast to make landfall in Florida as a hurricane, but its impacts including prolonged coastal flooding, beach erosion, strong winds, high surf, rip currents and heavy rain will encompass a much larger area of the Southeast.

Nicole is gaining strength and centered a few hundred miles east of the Bahamas and is tracking westward.

Nicole has a large wind field, which means impacts will be felt across a broad part of the Southeast coast far away from where its center tracks. Winds are already frequently gusting over 30 mph in Florida, particularly near the Atlantic beaches and occasionally along parts of the Georgia coast.

A​ hurricane warning has been issued for areas near Florida’s Atlantic coast from Boca Raton to the Flagler – Volusia County line, and remains in effect for the northwest Bahamas, including Grand Bahama Island. This means hurricane conditions are expected in these areas.

In addition to the tropical storm warning, a hurricane watch remains in effect for eastern Florida north of the Space Coast to Ponte Vedra Beach and south of Boca Raton to Hallandale Beach, including Lake Okeechobee. That means hurricane conditions are possible in this areas.

T​ropical storm watches extend along part of Florida’s Gulf Coast, from Bonita Beach to the mouth of the Ochlockonee River, extend inland to include Tampa-St. Petersburg and Ft. Myers, and also extend north of Glynn County, Georgia, to Charleston County, South Carolina. This means tropical storm conditions are possible in these areas.

A​ storm surge warning is also in effect from North Palm Beach, Florida, to Glynn County, Georgia, as well as a stretch of the St. Johns River in northeast Florida from Georgetown to where it empties into the Atlantic Ocean north of Jacksonville Beach. This means a dangerous, life-threatening surge of water along the coast is expected in these areas.

A​ storm surge watch extends north of Glynn County, Georgia, to Charleston County, South Carolina, south of North Palm Beach to Hallandale Beach, and also along a part of Florida’s Gulf Coast from Pasco County to north to Wakulla County, including Cedar Key. This means inundation from storm surge is possible in these areas.

Nicole will continue its general westward track toward the Bahamas and Florida.

Nicole is expected to become a Category 1 hurricane near the northwest Bahamas Wednesday, then maintain that intensity up to landfall along Florida’s Atlantic coast sometime late Wednesday night or early Thursday morning. However, impacts will arrive well before that happens, as we’ll detail below.

Nicole will then curl north near or over Florida before getting picked up by a cold front that turns the storm northeastward over the Southeast states on Friday. The remnant energy and moisture from Nicole will team up with that cold front to wring out heavy rain up the East Coast into Saturday.

Below is a breakdown of what to expect from Nicole. Keep in mind that Nicole’s large size means its impacts will spread far from its center, arriving sooner than, and lasting longer than, the passage of its center.

Persistent onshore winds well ahead of Nicole’s center will lead to coastal flooding along parts of the Southeast coast from Florida to the Carolinas through Thursday, or in some areas, Friday.

This c​oastal flooding at high tide will increase each day and peak as storm surge as the center of Nicole approaches early Thursday morning. The National Hurricane Center’s peak storm surge forecast, if it occurs at high tide, is shown below.

Given coastal flooding over multiple high tide cycles and battering waves riding atop the storm surge, major beach erosion and some damage to infrastructure is expected along Florida’s east coast and parts of the Georgia coast. This is particularly the case for eastern Florida’s coast damaged from Hurricane Ian in late September.

S​ome moderate to major coastal flooding is also possible as far north as the Carolinas, including Charleston, South Carolina, and Tybee Island, Georgia.

O​ne exception to this general scenario will be a part of western Florida’s Gulf Coast. Tides will start out much lower than normal due to winds blowing offshore. But by later Thursday, water levels may quickly rise as winds switch onshore once Nicole’s center moves to the north. This may lead to some coastal flooding and storm surge in the areas shown in the map below peaking Thursday night, but possibly lingering into Friday.

Gusty winds are already increasing on the Southeast coast ahead of Nicole.

T​ropical storm-force winds will be arriving soon in the northwest Bahamas and eastern Florida by early Wednesday. This could make preparations difficult.

H​urricane conditions are expected to arrive in the northwestern Bahamas Wednesday and in eastern Florida by Wednesday night.

W​inds of this magnitude are capable of downing trees and knocking out power.

The heaviest rain will first arrive in Florida beginning Wednesday, then should spread north into parts of Georgia and the Carolinas Thursday through Friday.

T​he heaviest rainfall totals are expected in northeast Florida, including some areas flooded from Hurricane Ian’s rain. Parts of the St. Johns River are still above flood stage following Ian’s rain about six weeks ago. According to the NWS Southeast River Forecast Centerthe St. Johns River slow fall in recent weeks post Ian will trransition to slowly rising levels for a brief time after Nicole’s rainfall.

Nicole’s moisture in combination with an approaching cold front will result in soaking rain for the Appalachians, mid-Atlantic and Northeast Friday into Saturday.

A broad footprint of 1 to 4 inches of rain is possible from parts of southern Florida into the Carolinas, Georgia, mid-Atlantic and Northeast, with locally higher amounts.

T​his could lead to flash flooding and some river flooding, particularly in the Appalachians and adjacent foothills, as well as parts of the Northeast urban corridor.

As with most landfalling storms, s​ome isolated tornadoes are also possible in Nicole’s rainbands from Wednesday through Friday from Florida to the coastal Carolinas.

N​icole is likely to become only the fourth November hurricane to landfall in the mainland U.S. in records dating to the mid-19th century, and the first to do so in 37 years.

Check back with us at weather.com for important updates on Nicole.

The Weather Company’s primary journalistic mission is to report on breaking weather news, the environment and the importance of science to our lives. This story does not necessarily represent the position of our parent company, IBM.