The Hugh Freeze era at Liberty is done. On Monday, Freeze accepted the head coaching job at Auburnmarking his return to the SEC.

The move comes after Lane Kiffin opted to stay at Be Missand despite Liberty’s 49-14 loss to New Mexico State to finish with three consecutive losses. Ultimately, Freeze’s 34-15 tenure over four years and his past success at Ole Miss was enough to get the Auburn job. Liberty is 8-4 this year, and the Flames won at least eight games in all four of Freeze’s seasons.This is a program that knows how to win. Its last losing season came in 2005, and it won eight conference championships at the FCS level from 2007 to 2016.

It’s a major moment of transition for Liberty. The Flames will move into an FBS conference for the first time next season, and now there is a coaching change on top of that.

So how good is the Liberty job? What names could get in the mix? Here are the factors to keep in mind.

This job has all the resources

Before leaving for Auburn, Freeze signed an extension that would pay him an average of just under $5 million per year. That would’ve been the highest salary in the future Group of 5, by far. Liberty has more than enough money to pay big for a coach and his staff, plus it has some buyout cash coming its way.

The facilities are also top-tier. The school has invested heavily in athletic facilities across many sports. The football program opened a $29 million indoor practice field in 2017, and the football operations building was renovated in 2020, expanding to more than 65,000 square feet.

This may be the best-resourced program in the Group of 5 now.

Liberty is moving to Conference USA

The Flames moved up from FCS to FBS in 2018, but without a conference invitation, which is normally required. Conference USA, the Sun Belt and others passed on interest, despite the Flames reportedly offering tens of millions of dollars for a spot. Liberty eventually got a waiver to be an FBS independent due to its resources. There were two reasons for the lack of an invitation: the outspoken politics of a school led by Jerry Falwell Jr. and those resources, which allow the school to drastically outspend everyone else in a conference.

Things changed. Falwell was ousted, and Conference USA got desperate for membership amid an exodus of schools last year. Now Liberty will join C-USA next season.

The timing couldn’t be better for both sides. For Liberty, a conference invitation was needed when the College Football Playoff expands to 12 teams. The G5 is guaranteed at least one spot in the expanded CFP, and with UCF, Houston and Cincinnati off to the Big 12, that bid could be wide-open. Liberty has reached the AP Top 25 in two of the past three seasons. People around Liberty believe an undefeated season could get the Flames in the Playoff. For everyone in the G5, a path is finally there.

The religious emphasis and politics of the school are unique

Liberty is a polarizing school. The evangelical school has a strict honor code, and though the outspokenly political Falwell is gone, the school has still tried to play a role in political changes. A number of Black athletes have also left the school in recent years.

The school expects its coach to be upfront and outspoken about Christianity, the mission of the university. Of course, plenty of college coaches are open about their religion, but it’s something that will be considered. The job is very similar to BYU in that sense. It’s not for everyone.

“We have to have someone who’s a strong mission fit,” athletic director Ian McCaw told reporters Tuesday. “Somebody who wants to train Champions for Christ and fits our university well. We’re also looking for someone who’s a strong leader, CEO, culture builder of our program. We need someone who tactically is very skilled and a strong recruiter. So, those are the main criteria for our search.” 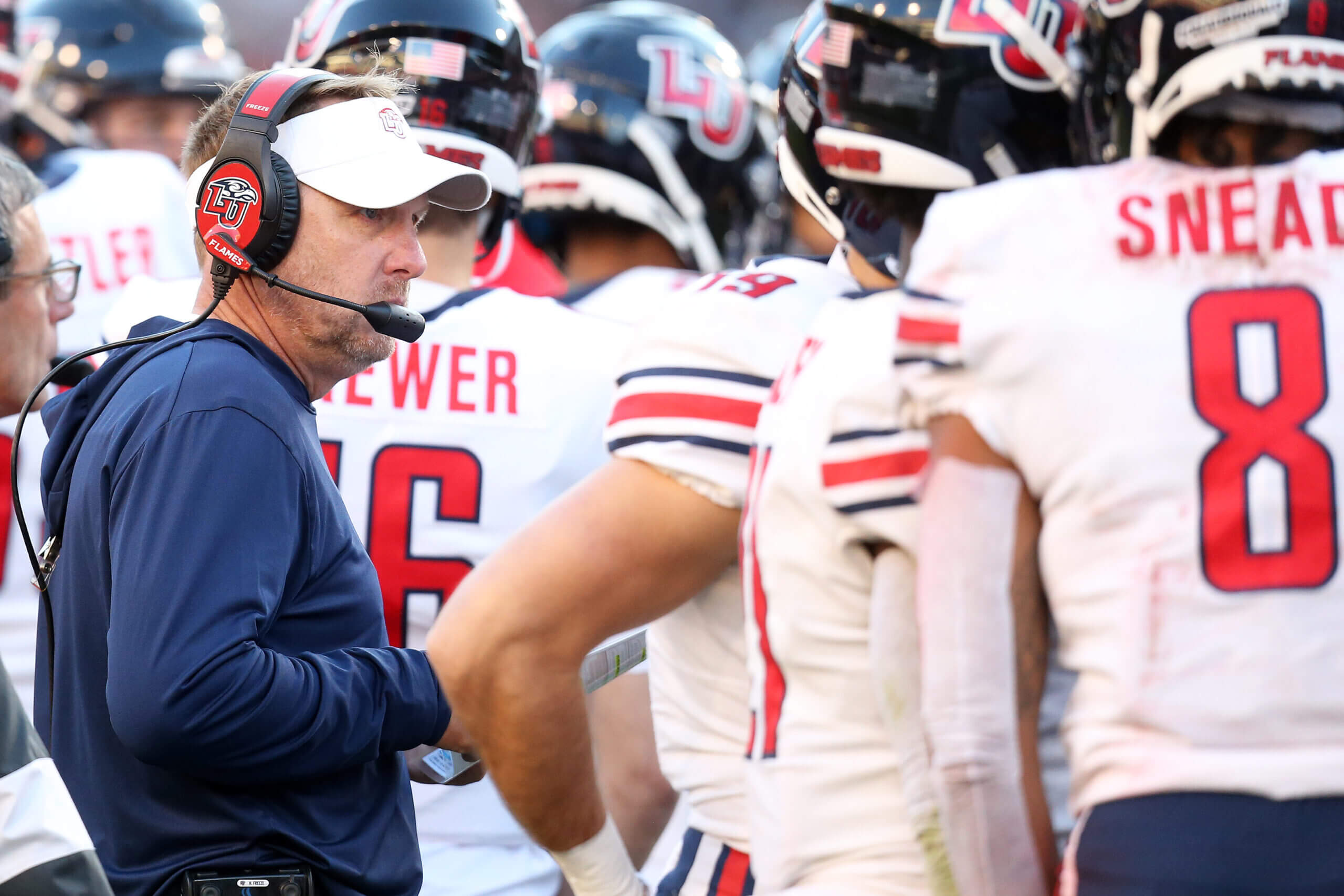 So what names could get in the mix?

Liberty is expected to make swings at some active head coaches, due to its resources. Coastal Carolina head coach Jamey Chadwell hasn’t been able to get Power 5 bites, despite his massive success at Coastal, opening the possibility of other Group of 5 jobs that pay a lot more, like USF. (And unlike USF, Liberty has won recently.) Chadwell is 31-5 over the past three years at Coastal, and he’s won everywhere he’s been. He was the lowest-paid FBS head coach before the breakout season in 2020, later doubling his salary to more than $1 million. Liberty can offer him a lot more. But would leaving the Sun Belt for Conference USA be a step up? Liberty could also make a push for other Sun Belt names like Georgia Southern head coach Clay Helton and James Madison head coach Curt Cignetti.

Indiana head coach Tom Allen has had a rough two years since the breakout season of 2020. After a top-15 finish that year, the Hoosiers have gone 2-10 and 4-8 in the past two seasons, including 2-16 in Big Ten play. Could a break be beneficial for both sides? His buyout is massiveat $20 million if Indiana wanted to fire him even after the 2023 season. But the buyout on Allen’s end to leave drops to $4 million on Dec. 1, which is plenty manageable. His salary is right around $5 million, something we know Liberty could pay, as it did for Freeze. Allen and Freeze also go back more than a decade together. Of course, leaving a Big Ten job for a Conference USA job would be basically unprecedented, but multiple industry sources have mentioned Allen’s name as one to potentially watch.

Arkansas offensive coordinator Kendal Briles has a previous relationship with McCaw from their time at Baylorwhere Briles coached from 2008 to 2016 under his father. Post-Baylor and the school’s sexual assault scandal, the younger Briles never left FBS football, serving as offensive coordinator at FAU, Houston, Florida State and now Arkansas over the past six years. He improved the Razorbacks offense from outside the top 100 nationally in scoring into the top 50, as the program bounced back, though this 6-6 season has been a disappointment. As for his father, Art Briles is not expected to be on the shortlist or in the mix for Liberty.

After losing a coach to Auburn, how about a former Auburn coach? North Carolina defensive coordinator Gene Chizik won a national championship with Cam Newton in 2010. Chizik has spent three years at UNC over two stints around periodic breaks from coaching. North Carolina’s defense struggled this year, but he would bring head coaching experience.

Florida State tight ends coach Chris Thomsen went 51-21 as Abilene Christian’s head coach over seven seasons from 2005 to 2011, when it was a Division II school. The Texas native has coached at Texas Tech, Arizona State, TCU and FSU since then.

Could Nick Rolovich be an option? Liberty had no issue hiring someone with a controversial background in Freeze. Rolovich was fired at Washington State because of the state’s vaccine mandate. The coach wouldn’t get the COVID-19 vaccine and his religious exemption request tied to his Catholic background was denied. As a coach, Rolovich went 28-27 at Hawaii, including 18-11 in his final two years, with a division title, behind an explosive and creative offense. He was 5-6 at Washington State before he was fired. Rolovich is also in the process of suing Washington State and officials over his firing, which makes him a non-starter at most schools.

As for internal options, Liberty co-offensive coordinator/quarterbacks coach Kent Austin developed Malik Willis into a third-round pick. Austin has been at Liberty since 2019 and was previously the head coach of the CFL’s Hamilton Tiger-Cats from 2013 to 2017. Co-defensive coordinator Josh Aldridge was named interim head coach after Freeze’s departure. He joined the staff in 2019 and was a Broyles Award nominee in 2021. Aldridge was promoted to co-coordinator after Symons went to SMU, and the two previously worked together at South Georgia.