A man stormed into a Thanksgiving dinner party at a home in Houston on Thursday night and shot dead his ex-wife and another male.

Two others, including a 15-year-old boy, were also injured in the attack.

The victims, who were celebrating with friends, had just finished eating when the shooter entered the property through the back door and ‘started firing at people inside the house’, police said.

He even stopped to reload his weapon – and ‘traumatized’ everyone there before fleeing the scene.

The Houston Police Department confirmed it received a 911 call at 9.18pm regarding a shooter in progress.

Officers arrived at the scene at 9.23pm along with the Houston Fire Department.

When cops entered the property in the 1500 block of Baggett Lane in Spring Branch they discovered four people had been shot inside the house.

A woman and a man were declared deceased at the scene. A 15-year-old is stable, and another male in the hospital in critical condition.

It is unclear what the relationship is between the victims because the family also invited friends over to the dinner.

But police said it is known the shooter was the deceased woman’s ex-husband, and that the former couple have a baby together.

There were four other people inside the house. As soon as they heard the shooting, they ran to other rooms for safety, police said. 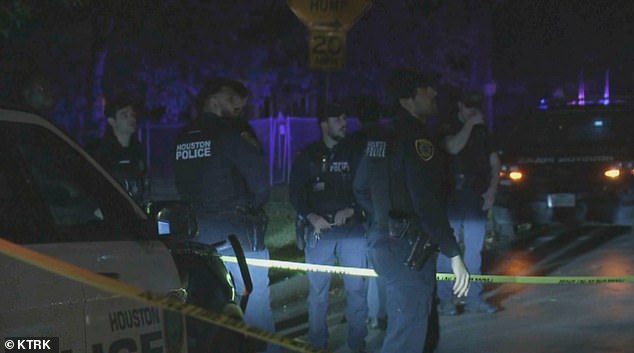 Multiple squad cars attended the home in Houston where a woman and man were found dead and two other people, including a 15-year-old boy, were injured 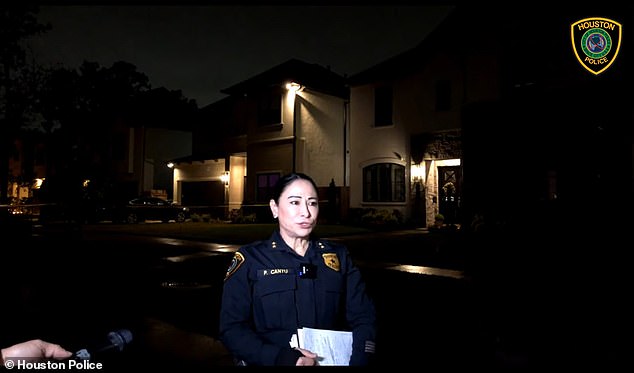 Speaking at a press conference last night, Houston Assistant Police Chief Patricia Cantu said: ‘We do know the suspect is the ex-husband of the deceased. We don’t know where he’s at. We don’t have his name yet.

‘We are going to be asking for the public’s help and the media later on to help us capture this man that killed two people in this house and injured two.

‘This is a very sad situation. It’s Thanksgiving and people are supposed to celebrate with their families, and we do know that this was [a] domestic-related incident.

‘We are praying for the families. As soon as we have more information, we are going to ask for the public to help us find the person that killed the two people in the house and pretty much traumatized everyone here.’

The identities of the victims have not been released and the investigation is ongoing.

Police said they would be asking for the public’s help to capture the man, who is still at large